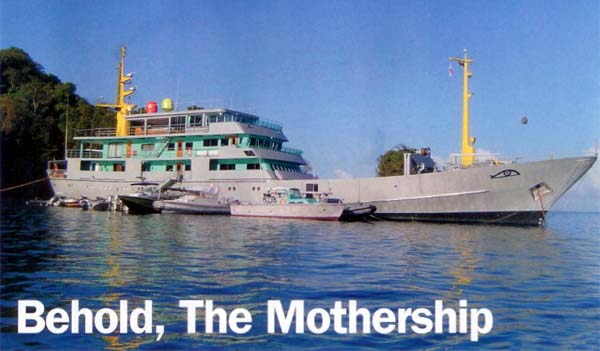 Above: Launched in 1966 as Albacora, the renamed Amazon Express
is one of the oldest motherships currently in operation.

The concept of the fishing mothership is as old as man has been going out to sea in a cooperative manner and carries on now in societies within the South Pacific and other places around the world much as it did in the past. In primitive fashion, one large mothership would tow a number of smaller canoes out to the fishing grounds that the smaller craft could not reach alone, collecting and holding the fish, providing supplies, a place to cook and in some cases, a deck to sleep on until all were ready to return.

Today's modern equivalent to this are the factory motherhips and their flotilla of vessels that run out miles of gill nets and longlines. If you travel the world's oceans you will run into a number of them, depleting the fisheries in far-flung locales. These vessels stay at sea for months, fueling and being supplied from the factory ship and offloading their catch, where it is fully processed, flash frozen and held until all holds are full.

These basic concepts have been interpreted in a number of ways with regards to recreational sport fishing. There is the fixed floating vessel that gets towed to locations and anchored for a season in a remote bay that supports skiffs and other smaller fishing boats. You can find them in Alaska or the south of Chile during the summer for inshore and offshore fishing. Some of these vessels even provide helicopters to deliver their guests to remote streams that are inaccessible by any other means. They are floating lodges or "hotels", providing all the amenities of first-class accommodations, but none of the flexibility of a true mothership.

Another class of mothership is a vessel that tows behind or is followed by a group of smaller vessels and provides support for the day or a few days at the time. They tend to be simplistic and provide minimal support and comfort for the parties associated with them. Some provide their passengers with a smaller fishing boat; while on others you fish on your own boat and simply use their facilities.

You can find these vessels operating in many areas anywhere around the world from Key West to the Great Barrier Reef. The class of motherships we are primarily interested in are the ones designed or converted to carry a sport fishing vessel onboard.

They serve both as a full support vessel to the sport fisher and as luxury floating mansions to the owner/guest. This type of mothership is capable of transporting a sport fishing boat to fishing grounds anywhere on the globe with the capabilities to support it for long periods of time no matter how remote the location. Most have world-class chefs aboard with first class provisions for months and provide a level of service found only in some of the finest five-star hotels.

These vessels also encompass workshops, spare parts and any other items needed to ensure the fishing vessel is always ready to meet her owner's demands. They can carry guides for the specific location they are fishing, and on occasion act as a hotel for crew and guests during extended tournaments. Some, like the floating lodges, carry helicopters for spotting fish and transporting guests to non-accessible fishing locations, much like the Atmosphere, belonging to the Nomads of the Seas operation based in Patagonia. Many times, these heli-capable motherships report fish in streams that have never been fished by man.

The mothership Atmosphere can transport anglers to some of the most
remote fishing spots in Patagonia by air or by sea. 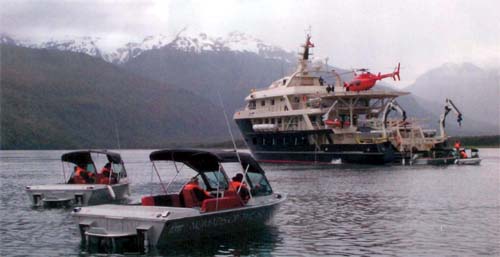 I have not been able to establish what vessel was the first in the mothership class. The first one I remember seeing was in Fremantle, Australia during the 32nd America's cup in 1983. I was captaining an 86-foot sailing yacht whose owner was a backer of one of the challengers. Kisuca, now named Amazon Express, came into the bay and anchored. She was a huge vessel at that time, 253 feet long, and very imposing with her refined commercial look. After anchoring, she proceeded to offload a 44-foot Bertram sport fisher, much to the harbormaster's surprise, while maintaining another smaller sport fisher on deck. A few weeks later I had the opportunity to inspect her. She was a wonderful old world wood interior and was quite the gentleman's yacht within the guest space, but all business on the exterior and in the working areas. Her owner used her to fish all the remote locations in the world. Today as Amazon Express, she is carrying on her mission to find the next unchartered fishing destination. 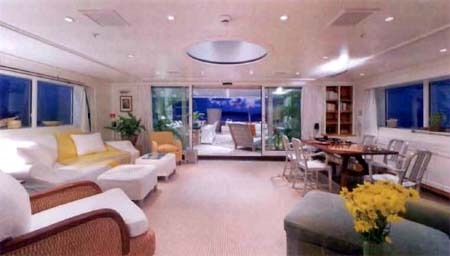 Like most of today's motherships, Senses' interior boasts a myriad of amenities and all the comforts of a luxury five star resort.

Wondering how these motherships offload their massive sport fishers? There are a number of ways. The traditional method is via a large crane/davit. Many of the converted commercial vessels already are equipped with these for loading cargo, and during the conversion, they simply fitted a cradle to the deck amid-ship on top of the old fish or cargo holds to support a boat. This system has the advantage of being very simple, but with a single lift point, the vessels being lifted can be quite difficult to manage in disturbed water, requiring a large number of crew to be involved in the coordination. The larger the vessel, the more disadvantages this method has. Over the years there have been a number of other methods used and developed. Stern U cranes as you often see on wire laying ships and research vessels carrying submarines, provide greater stability when lifting sport fishers in disturbed waters. With this system, the vessel being lifted has less room to swing because it is loaded aboard in a straight line, limiting its movement. Another system for stern loading is to have a cradle that sinks into the water via a stern ramp. The sports fisher is driven into the cradle, secured and then hauled up the ramp. This method eliminates the danger of dropping the vessel being loaded and lessens the chances of injury to the crew, though it is fairly complex to maintain. 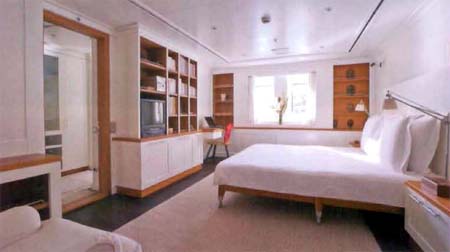 Senses, a 194-foot explorer yacht has a very innovative system. It was derived from the lifeboat escape approach for large oil rigs and is a deployment and recovery system. The original system launched lifeboats on a patented extending rail system and was also able to retrieve them after lifeboat drills. This system not only allows Senses to launch and retrieve the tender at anchor, but also while the vessel is underway. Launching and recovery can be handled by one crewmember as the boat is drawn into the fully rendered slip that's built into the stern. Another vessel was recently fitted with a huge forklift similar to one you would find in a large boat dry storage marina. This one was fitted to a rail system on deck that lifts the sport fisher and its cradle which is welded to the forklift and runs out the side of the boat deck, which is fitted with hydraulically lowering bulwarks. 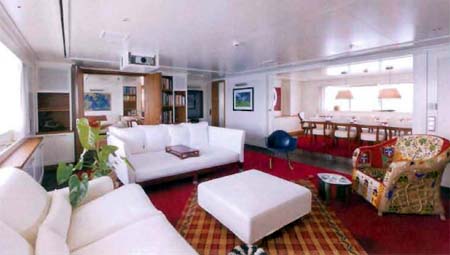 This system requires very little crew, but can also be vulnerable to disturbed seas. All Ocean Yachts is currently working on a system of having a floating dry dock that the sport fisher can run up to and be stored on in the stern of the mothership or moved out to be secured along its side. The dock could also be used as a work platform or towed out to a reef and used as a dive platform. The first of these motherships is slated for construction by INACE shipyard, a leading builder of explorer yachts. 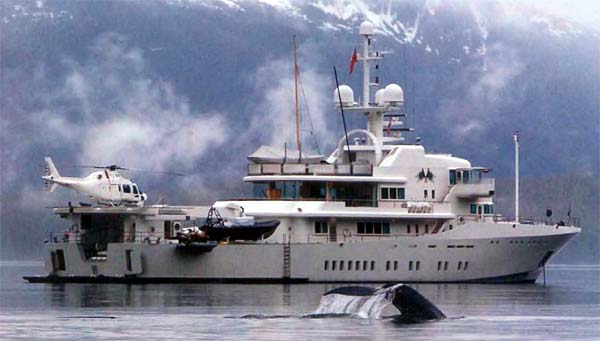 Capable of roaming to the ends of the Earth, motherships continue gaining in popularity
among serious anglers in search of unchartered fisheries.

Many of these world-class motherships are privately owned, following the fish wherever their owners direct them. However, in recent years, a number of them have been made available on the charter market. Some are simply dedicated to fishing, while others are explorer vessels that carry a number of fishing boats aboard as part of their toy inventory. Senses, the vessel mentioned earlier is available for charter as are a number of others including Latitude, which serves the coast of South America, Seawolf, a converted tug stationed in Central America, Tribu in Southern Brazil, and Surprise in the South Pacific.

What all these vessels have in common is their ability to meet their owner's requirements to transport them and their guests comfortable and safely to the greatest locations in the world to fish, no matter how remote, whether for big game fish off the coast of Australia or fly-fishing in Patagonia.

All Ocean Yachts at www.BuyExplorerYachts.com is dedicated to building, design consulting, brokerage and chartering world wide cruising vessels, explorer yachts and motherships. Our professional and knowledgeable staff can help you find the right vessel for your needs, whatever they may be.

Please feel free to re-publish this article on your website, provided that the above resource information is included at the bottom of the article and that all links within article remain active.